We invite you to participate in all of our events and compete for prizes. Grab some friends, make some memories, and warm your heart out in the cold with us this holiday season!

SNØMARKET is our annual outdoor winter celebration in our back parking lot.  Parking is available on the local streets in our neighborhood in Rockford's North End.

Each day, we will be offering drinks (hot cocoa, akvavit in ice cube shot glasses, hot cider, & glögg in glass mugs), hot food, sweets like krumkake & kannelsnurrer, gifts and handmade items to purchase, yeti picture-taking, and more.  Our neighbors at Rooted, Wonderland Sweets, & The Norwegian Artist Lofts will also be celebrating with us.

We're pausing the t-shirt part of this campaign to print our first round of 300 shirts. We'll open it up again after we fulfill our initial order.

"Skiver Fever" artwork by Joe Tallman & Alison Weust. Screen printed in Rockford, IL on a t-shirt made of 100% recycled materials. Available in plain white or dyed (with our restaurant food scraps)

We're pausing the t-shirt part of this campaign to print our first round of 300 shirts. We'll open it up again after we fulfill our initial order.

"Skiver Fever" artwork by Joe Tallman & Alison Weust. Screen printed in Rockford, IL on a t-shirt made of 100% recycled materials. Available in plain white or dyed (with our restaurant food scraps) by Anna Owens.

The Short Story: We partnered with local artists to raise funds to pay State of Illinois unemployment tax penalties that were incurred due to our forced shut-down during the COVID-19 pandemic. Our business will owe the State of Illinois tens of thousands of dollars over the course of the next two years because we followed the mandated shut-down orders. We have already had to pay about $30,000 this year alone.

The Full Story: Æbleskiver (we call them skiver ("skee-ver") for short) are Danish pancake balls that we serve with powdered sugar and our house raspberry jam.  We're one of the few restaurants in the country to serve them. We thought: what better food to feature on a shirt to raise awareness about the little Nordic pub that we're fighting for here in the North End of Rockford.  We asked our friends Joe Tallman and Alison Weust to design us the art.  We are screen printing this design on white t-shirts made from 100% recycled materials, then one of our pastry chefs--Anna Owens--is using our food scraps to dye each shirt. We're so grateful to work with this talented team.

To explain why we're hosting a fundraiser, we'll need to start at the beginning of the pandemic.

On March 15th, 2020, Illinois Governor J.B. Pritzker shut down restaurants and bars.  We complied with his request.

A few months later, we were allowed to reopen with outdoor seating and limited indoor seating.  So we moved half our tables outside, built additional outdoor seating, and complied with his request.

A few months later, we were forced to close for indoor dining.  Not wanting to lose our employees, especially right before the holidays, we pivoted into a holiday market, making a shopping experience for our community.  Our neighbors supported us, and we were one of the fortunate restaurants who made it through the pandemic.

On January 2nd, 2021, we shut down the holiday market.  Because the State of Illinois was still not permitting indoor dining, we complied, and we laid off our staff.  We called IDES, and we were told to label lay-offs as "COVID-19 related," and our unemployment tax rate would not be affected.

We had ZERO unemployment claims before the pandemic. Today, our rate is currently the highest in the State of Illinois: 7.625%. Unemployment tax rates usually drop over the course of a year, but the normal turnover in the restaurant industry doesn't allow for that sizable of a drop.

We called the Mayor of Rockford, Tom McNamara.  He fought as hard as he could for us.  We called our Representative, Maurice West.  His Chief of Staff said he understands how grossly unfair it is, but there's nothing he can do.

We called IDES.  Their lead lawyer told us IDES was "punishing the wrong people," but there's nothing they can do.  He recommended we shut down for a full year to reset our rate.  He apologized, and said the State of Illinois is 6 billion in debt after paying unemployment to workers, and they need to make it back somehow.  So charging small businesses is how they plan to do it.

We have no choice but to take matters into our own hands.  We're trying to raise money to pay the State of Illinois for following their orders.  We do not make enough a year in profits to pay them.  Our margins have always been small, and with the rising rates of food, gas, and wages, they've never been smaller.

If you don't have money to buy a t-shirt (and if you're not already burned out of helping independent businesses by now) we ask that you share the word about our fundraiser.  If you'd like to go an extra step, call Representative Maurice West and tell him that charging local independent businesses the highest possible unemployment rate is just plain wrong, especially after they were told by the Governor to remain closed in January of 2021 and were told by IDES employees that our rates would not be affected.  The number is 815-987-7433.

Politically, we may differ. Our friends on the right believe we should have bucked the Governor's orders in the first place. Our friends on the left believe we shouldn't besmirch the reputation of their representatives. We're not making a political stance or inciting emotions. We're simply raising funds to give our restaurant a chance at going forward, and explaining why we're doing it.

Thanks so much for your support, The Norwegian Team

For those who don't want a t-shirt but still want to help. 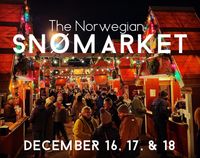 Our annual outdoor holiday party where we transform our back alley into a Nordic fishing village! 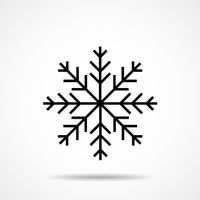 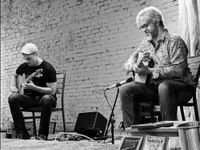 Our great friends from Madison return with their incredibly gypsy jazz sound. One of our staff's favorites.

We highly recommend making reservations through OpenTable. You can make reservations or join the table wait list using the form below or the app on your phone. We look forward to seeing you soon.